The star bird lately was obviously the Pacific Swift at Trimley Marshes. I saw this on Saturday, with the news coming out shortly after 10am. I had just got up and planned a day of revision but there was no way I couldn't go for this. Despite my best efforts and Franko phoning around for me I couldn't team up with anyone but I was fairly confident that being able to drive there at 1.30pm, when my dad was due to finish with the car for the day, would be good enough. I arranged to pick up Dan and Michael Booker and Harry Ramm from Dartford and collected Ian from Wallington, completely filling the car. Once we got to Dartford, the rest of the journey was fairly efficient, but storms and a brief spell of negative news on the bird dampened spirits on the way. The bird reappeared on the pager, though, prompting a cheers and a slightly heavier foot on the gas.

On arrival it was evident that getting to the precise viewing location was going to be a miserable affair and we got soaked immediately. I think the walk was a little under three miles each way and we were treated to a complementary hailstorm for much of the trek. I hadn't eaten in hours, was soaked to the skin and feeling utterly miserable. Knowing such weather can see swifts off, I didn't want to ask returning birders for the latest news as I approached, although I felt so crappy that I didn't think seeing the bird would be the buzz that it should. Eventually we got to the river wall overlooking the marsh and the PACIFIC SWIFT was picked up as the weather began to soften - I was very wrong about the buzz being killed, this was one absolute cracker and I no longer cared how long it would take for my socks to dry, or that I would have to drive home with a wet arse. The bird cruised back and forth across the marsh at its leisure, allowing intimate scrutiny of its features through the scope and opportunities for photographs. Happy happy happy! A summer-plumaged Spotted Redshank and a Yellow Wagtail were good back-up birds alongside the Avocets, Oystercatchers etc. I just about managed to get Dan, Mike and Harry back to Dartford in time for the train and Ian and I got home some time around 10.15pm. Ta for the company! 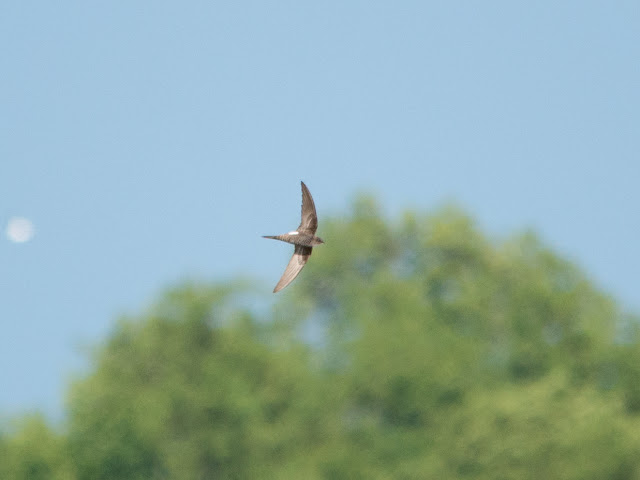 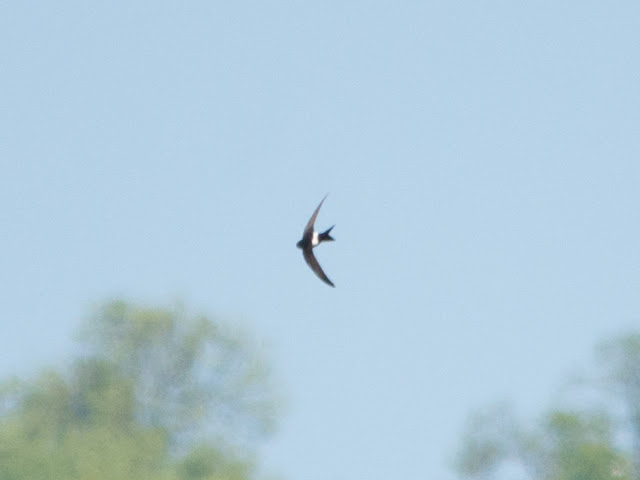 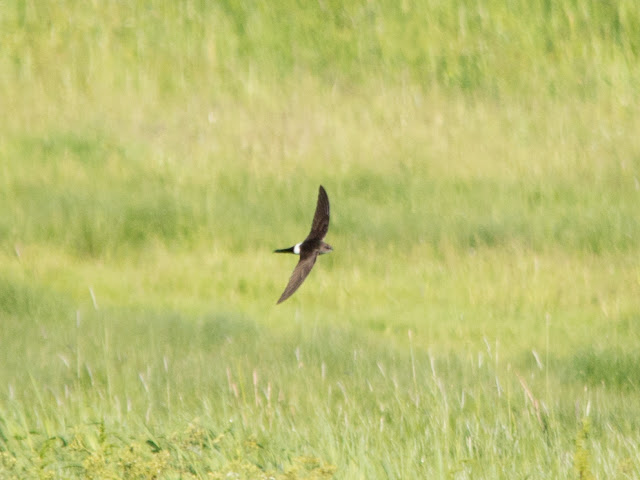 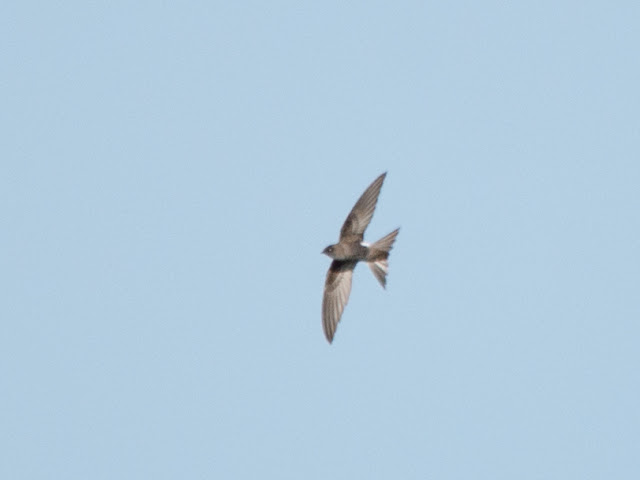 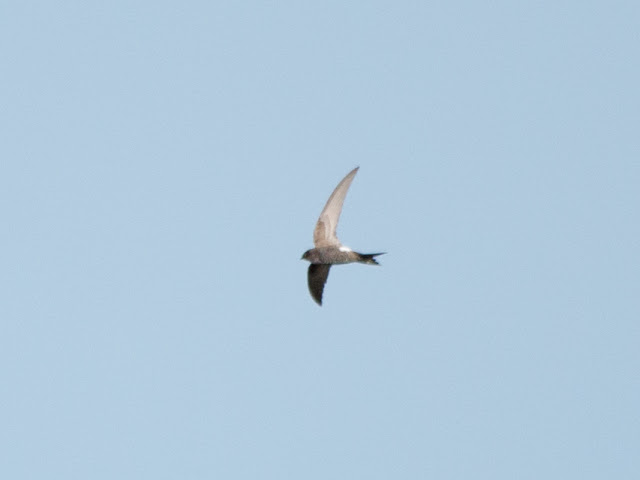 On Sunday 9th May, I picked Ian up and we headed Kent-bound for the Bee-eater that was present for its second day at Pegwell Bay Country Park. I had only been to the place once before, where I saw the Zitting Cisticola (all of its congeners are called cisticolas, so I don't see why we should call this one 'Fan-tailed Warbler' so that it can fade into the pages with the acros, phylloscs etc ... even though it's a slightly naff name). We joined the end of the crowd when we found the right place, the bird apparently being close and in the open in a small bush, but it turned out that we couldn't see it from where we were standing. By the time we reangled and just about got on it, the Bee-eater took flight, right over our heads. It proved mobile but a couple of hours on site were rewarded with prolonged flight views and some distant looks at it perched prominently atop tall hawthorns and the like. It was nice to catch up with Neil Randon there. 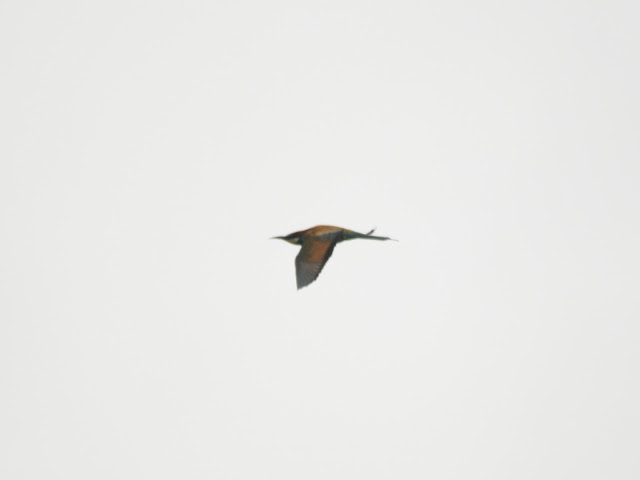 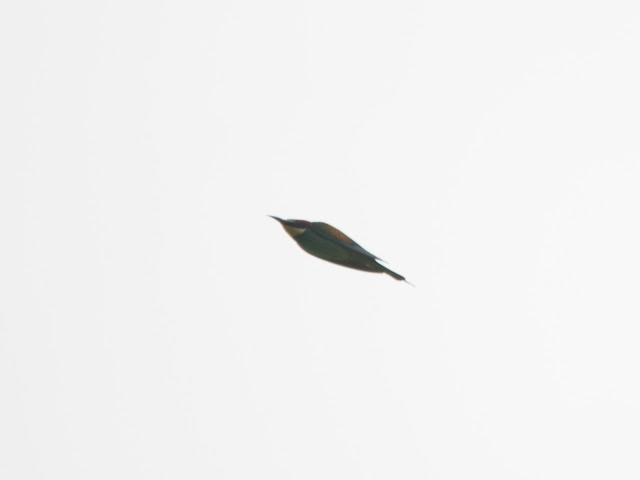 Even though Ian didn't need Black Kite, I did, so on the way back we stopped near Selling and got onto the Black Kite cruising slowly over the valley with surprisingly little trouble. We left it in the same bit of sky that we first saw it in, after the passing of at least half an hour! I'd seen these abroad but not for ages and Britain is what matters for me so this was like a totally new bird and it was great to have a long look at what made it a Black Kite, in a British setting. 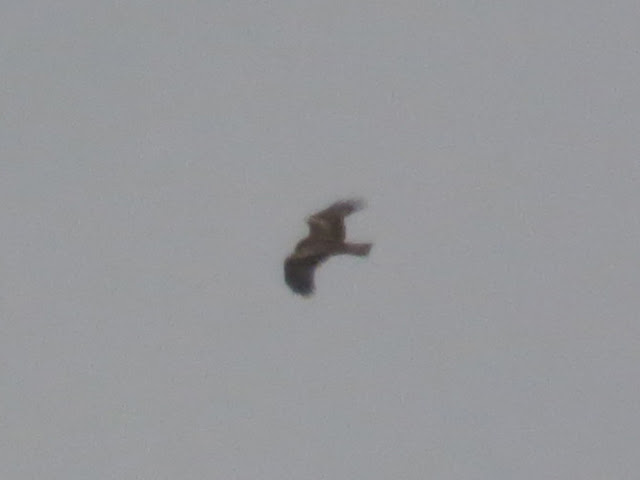 My exams are all over now so I can thankfully return to birding without such pains that normal life brings, for a few months at least.