Well, I returned at 4.30am this morning from the most physically draining and emotionally turbulent twitches I've ever been on and I might ever go on. Fairly late in the day on Tuesday, when news came through of a White-throated Needletail on the Isle of Harris, there was immediately nowhere else in the world I more wanted to be than on that island, but I had to accept that I would have to hope that the bird stayed till Saturday for me to get it (leaving Surrey on Friday evening). Just when I was going into the cinema with a friend, the possibility of being able to leave that night began to open itself up, with the most important of my two commitments of the week changing and word from home that my dad didn't need the car for the following two days.

I'd earlier received a call from John Benham asking about my plans to see the bird and I'd told him that I could only go later in the week if the bird remained, so I called him back and I arranged to pick him up from Tadworth around midnight before going into the screen and trying to enjoy the film while figuring out the logistics of the trip. Once it was over, I called in at home to grab a few things then picked up John and we were on our way. Obviously at that time of night, the traffic was fine and we whizzed past town upon town as we climbed the country. We had two brief fuel stops, and another brief pause to pick up fresh drinks but otherwise drove non-stop, arriving at Uig, Skye, shortly before 1.00pm. Black Guillemots, a female Red-breasted Merganser and a Hooded Crow were the only birds that caught our eye as we prepared our tickets, gear and supplies for the crossing.

There were a few other birders on the boat and I spent a particular amount of time talking with Mark from Bedfordshire, James Hanlon, Kevin from Staffs and Jeff from Skye. The highlights of the crossing included a group of Manx Shearwaters and a handful of Puffins, Razorbills and Guillemots. A Bonxie flew past. News from the island was not good - getting through to Liam Langley and Andrew Kinghorn was a struggle but at first the news that the bird had moved off firmly south after an RAF fly-by (before they managed to see it) was disconcerting to say the least. After some time, I called Liam again 'Yeah! It's still here!!! We're watching it now!!!' he shouted - I announced this to the birders on the boat and we sprang into action finding out exactly where to go and how to get there. I agreed to take Kevin and Jeff, in addition to John, in the car to the bird.

We parked up when we saw the guys by the road and piled out of the car (unfortunately resulting in the breakage of my SLR (for once not at my hands), which killed the buzz of connecting with the bird for me, but I'll leave it there...). So, we were straight away put onto the WHITE-THROATED NEEDLETAIL as it cruised, hardly flapping, over the hills, loch and moorland. By this point I was utterly spaced out and everything felt scarily dream-like so the initial distant views didn't do much to raise my spirits after my camera's casuality. After a while though, the bird gave a pretty good show flying right over our heads and allowing itself to be tracked with the scope as it flew in good light and against the slopes, really bringing out its quite remarkable plumage patterns and tones. A Golden Eagle flew over at close range, which was fantastic.

After perhaps a couple of hours of enjoying the bird, I felt happier but still zonked out and sat down to rest. The bird appeared again and I got the scope on it, seeing it rather well. It then flew past the wind turbine on the top of the hill by the loch, turned and... well, flopped to the ground! My senses not being with it, I didn't know what to make of what had just happened but it soon became apparent that I had just witnessed the bird collide with the turbine and hit the ground! We all ran over there and were heartbroken to find the poor bird lying beneath the machine, in perfect condition apart from blood and slight trauma on the head - but it was stone dead... cries of sorrow and anger from the assembled birders began to turn into discussion as to what would happen to the bird's corpse, as we took pictures of it lying there. Seeing it up close, as much as I'd rather it were still alive, was, if nothing else, a rare opportunity to examine the utterly amazing plumage and structure of the needletail. You could see the needle-like feathers on the tail, the white markings that were visible in the field and, most impressively, the scintillating metallic-purple sheen of the bird's wings. The large pale mark on the bird's back that appeared whitish most of the time in the field revealed itself to be a glowing mix of colour. We paid our final respects to the bird and made tracks for the town to get food and digs, still in shock over what we'd witnessed. 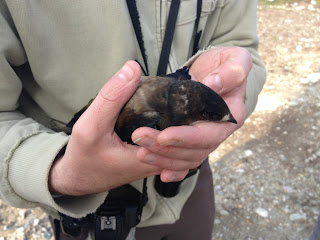 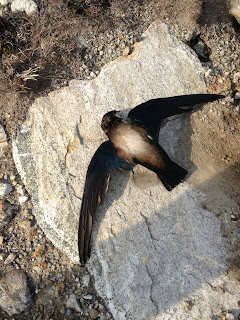 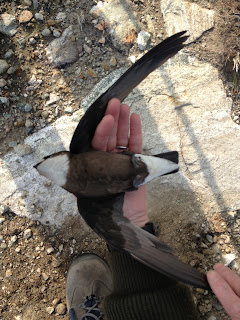 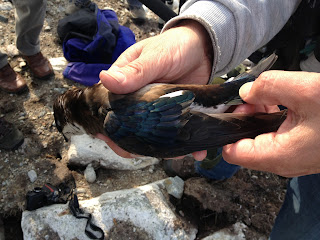 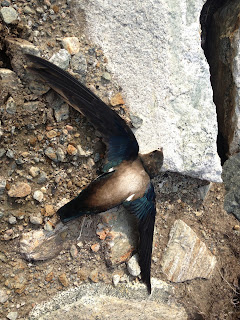 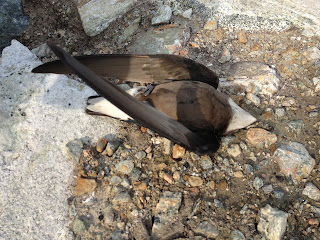 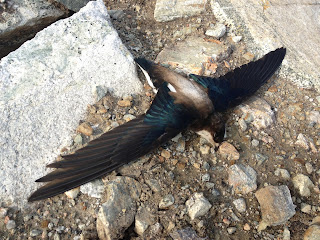 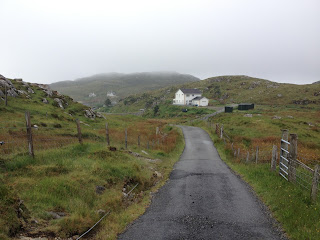 The following day, we got up at our digs and had breakfast before revisiting the site to take pictures of the wind turbine which I'd been asked to get. A Common Sandpiper and three Wheatears flew up from beside the road. It was soon time to board the ferry, and an Arctic Tern flew over as we were getting on. The crossing saw a small number of Storm-petrels and the same auks as on the way out, plus a couple of Fulmars and more Kittiwakes than we'd seen outward. We had a good chat with the other birders on the boat before heading home. We made brief stops to see if we could jam into Corncrake and Dipper but had no luck. I got home at 4.30am this morning - I certainly won't be forgetting the trip for a long while. What a sad twist.

The ironic demise of the world's greatest flying machine captured the attention of the local and national media, with the story bringing up the issue of the impact of wind farms on wildlife. Yesterday I took several calls from journalists. I gave three or four radio interviews and featured on BBC Radio 4 and BBC Radio Scotland. I was even invited to appear on Newsnight Scotland, but the logistics involved in getting to a studio did not work and the more suited James Hanlon took the role instead, but I was pleased to see they used one of my images and a part of one of my radio interviews on the show.